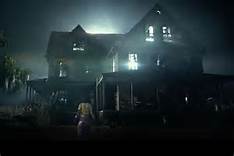 Sometimes you feel like a thriller about aliens invading the planet…but other times you feel like a horror film about a murderer who kidnaps people and takes them to a secret lair. Why not have both? Dan Trachtenberg’s 2016 release combines the best (or worst) of both worlds in a successful attempt to keep the viewer on the edge of their seat with suspense. 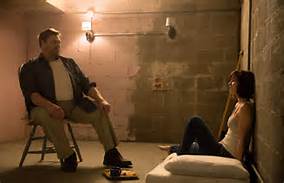 Mary Elizabeth Winstead plays Michelle, a young woman who is in an automobile accident as the movie begins. She awakens in a dimly lit room, obviously not part of a hospital or other medical facility, and she soon discovers she is fastened to the bed. Enter Howard, played by John Goodman, who explains to Michelle that there has been an “attack” outside and that the whole world has been changed from what she knows. The air is poison, and he has brought her to his underground bunker for a safe recuperation. His story is backed up by Emmett (John Gallagher, Jr.), who is also injured but seems to be there of his own free will.  After the rough edges get smoothed off, Michelle settles in to her new situation and the three of them start to live some semblance of a normal life together.

However, as well as Howard has prepared his bunker and his story, Michelle begins to have doubts. She begins to gather clues and get ideas about what may have happened to other people who visited the bunker. She begins to notice that Howard is not as stable as he claims to be. Emmett resists her suspicions at first, but soon the evidence becomes undeniable. Something has to give. Even after receiving what seems to be confirmation of Howard’s tale of what happened to the world outside, Michelle is convinced that he is just as dangerous at the environment. She convinces Emmett to assist her in planning an escape. The plot thickens as the pair creates the items they need to make it in a poisonous atmosphere. Howard’s labile emotions add suspense to the plotting and planning as time ticks by for the two.

In a space as small as an underground bunker, it isn’t possible to keep a secret for long. Howard eventually discovers the tools that Emmett and Michelle are using to craft their escape. Things spiral out of control from there, with Michelle ending up on her own for the last third of the film. She manages through some pretty wicked means to escape Howard and his bunker, and suddenly finds herself…outside.

Equipped with her homemade protective gear, she quickly decides that Howard was making up the whole story. The air seems fine. Birds are flying overhead. All must be right with the world, correct? Michelle quickly discovers that all is most definitely not right with the world; in fact, she wants desperately to be back in Howard’s comfy bunker. Although he wasn’t quite correct about the cause of the catastrophe, Howard was certainly correct in that one had occurred. Michelle gets a good look at what she is fighting, and in one scene uses a technique MUCH more corny than the water trick in Signs to destroy one of her adversaries. The end of the film comes swiftly, and leaves a lovely opening for another installment. That being said, the ending of the film is very fitting, but that future installment is not really necessary. This film has succinctly covered all the necessary bases in one work. Give it a watch and see for yourself how edgy it makes you when Dan Connor is screaming at people about the world being destroyed while showing them human-devouring acid and acting like a male Annie Wilkes. I don’t think you’ll be disappointed.