A stormy night rages while a group of strangers converge on a dark and mysterious mansion. Nobody understands why they’ve been invited to a party here, and everyone has been instructed to remain cloaked in the pseudonyms assigned them by their “unknown host”. As if this opening isn’t enough to hook the viewer, the tale gets ever more curious as the story unfolds. As the tagline says, “it’s not just a game anymore”.

While released in 1985, the film – based on a murder-mystery board game of the same name – is set in 1954 New England and is steeped in the atmosphere of fear-mongering McCarthyism, and the Hoover days of the FBI. The main characters (all using fake names) are being blackmailed by an unknown person – a person who happens to own the mansion in which they’ve found themselves. A dinner party has been planned, and their mutual malefactor has promised to free them of their treacherous ties with him during the gathering. The party commences, dinner is served, gifts are given…and that is where the party begins to truly spiral out of control (and into the land of macabre hilarity).

The cast is absolutely superb, both as a group and when it is needed that each character stand alone. One would be hard pressed to find another example of such a beautiful tapestry of experience, wit, scathing use of sarcasm, slapstick comedy, and charisma. All of this talent is put to use weaving a story that has both humor, murder, and an undertone full of messages about the warped methods used to divide the American citizens of the time. Televisions throughout the scenes are showing coverage of the McCarthy trials, and the endings are blatant mockeries of the same. If the viewer isn’t careful, it’s easy to get caught up in the surface story and miss the layers of intricate jokes and verbal parodies that are hidden throughout the entire film. Even being aware of the level of cleverness employed by the film, and trying to keep one’s eyes peeled and ears open for the jokes and innuendos and plain old knowledge bombs being dropped, it is next to impossible to catch everything in the first viewing. This film needs to be watched multiple times, at multiple ages, for a person to fully absorb, understand, and make use of all it offers.

Every character is vital to the overall success of this work, and justly so, each character has their own special brand of wit and attitude.

Miss Scarlet asks Professor Plum why the car has stopped in the drive, just upon the mansion coming into sight. Christopher Lloyd quips back in perfect psychobabble – and in an expression of his own true feelings – “It’s frightened”. Professor Plum continues to lay on the skeazy-psychologist schtick perfectly thick as the evening proceeds. While he’s examining some negatives depicting adult images that have been used to blackmail one of those guests present, Mrs. White states, “Oh my…nobody can get into that position!” He quickly responds by taking her in his arms, dipping her low, and saying, “Sure they can. Let me show you!

“Perhaps his finest line, however, comes near the end of the movie, when Miss Scarlet states that his friends at the UN would be shocked to learn of his past transgressions with his patients, as well as his involvement in several deaths. He retorts, “You don’t know what kind of people they have at the UN; I might go up in their estimations.”

Mrs. White is another character cloaked in mystery, with the reputation for having murdered her husband. She explains, in her normal deadpan, that he was found dead at home. They had cut off his head, and “his…you know…”, as she points demurely toward the floor. Prior to this, when asked what her husband does for a living, she refers to the fact that he does nothing – he lies on his back all day. (Miss Scarlet is quick to voice her opinion that that sounds like hard work to her.) Mrs. White is fast to play the victim, but never afraid to play the black widow either, it seems.

Madeline Kahn does a top-notch job of bringing this femme fatale to life in all her soup-slurping, husband-murdering glory. The highlight of White’s role is when she is describing her anger at another character – “I hated her so much…flames, flames…on the side of my face…breathing, heaving…heaving breaths…”, all of which was improvised.

Mr. Green is a fellow that seems all thumbs and left feet. Socially awkward and overly timid, his passive nature is immediately demonstrated when he arrives at Hill House. Wadsworth greets him at the door, where two snarling guard dogs are tethered in a strategic location. Wadsworth says,”Sit!” (to the dogs, of course) and Mr. Green promptly sits on the stone bench outside the door. It is only after Wadsworth corrects Mr. Green’s misconception that Mr. Green stands and enters the mansion. He later proceeds to tell the other guests that he is a gay man working in a government office, and thus subject to blackmail in order to keep his secret safe and his job secure. He endures snide comments and has many hilarious scenes that revolve around his little secret throughout the evening, as well as showcasing his clumsy nature. Around him, drinks are spilled left and right, and broken furniture piles up almost as fast as dead bodies.

Miss Scarlet befits the name given her in all respects. She is seductive, and dressed to play the part of the temptress. Her lips match her pseudonym, and her tongue is as sharp as her bustline is low. When asked how she can make jokes at a time like this, she replies that it is her “defense mechanism”. Although she is a member of the oldest profession in the book, she is more of the “look but don’t touch variety”, with a cool and aloof demeanor. That facade cracks, however, when she is teamed up with Colonel Mustard to search for the killer. He being less than a man’s man, she finds herself left to look behind the curtains in one of the rooms. Could it be those curtains are moving ever so slightly? Miss Scarlet, ever the brazen dame, keeps her fear in check and wades in to investigate. Later in the same segment, they find a secret passageway. (For lovers of the board game, this should be familiar as one of two that exist and lead to the same rooms that they do in the game.) The passsage leads to a grisly discovery of yet another dead body. People continue to drop like flies, and Miss Scarlet’s defense mechanism’s effectiveness is wearing down quickly. Fun fact: Lesley Ann Warren’s screams were so classic, they were dubbed for use as other characters’ screams as needed. 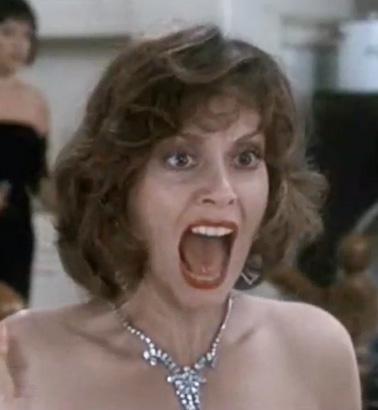 Mrs. Peacock is a diplomat’s wife and exudes stuffy old-school etiquette and has a nervous laugh that belies her underlying discomfort in her current situation. Trying to break the ice at dinner, she launchs into a breathless monologue about hosting and being used to entertaining “as the wife of a…” but then catches herself just before revealing her true background. Later, she begins screaming in hysterics upon the mention that the brandy might be poisoned. Her shrieks end only upon a quick slap across the face by Mr. Green – “I had…to stop…her screaming…” Mrs. Peacock’s melodramatic notions continue throughout the evening, with well-placed screams and untimely fainting spells, all while being perfectly attired in dusty old furs and sequined cat-eye spectacles befitting her character.

Colonel Mustard is the epitome of a high-ranking military official with old money and soft hands. His wry humor and lack of a backbone leave him shaken – not stirred – by the time Wadsworth is beginning to explain how the evening’s mayhem went down, case by case. With his frazzled nerves to match his threadbare dinner attire, Colonel Mustard states that he “can’t take one more scare”…which of course is simply an invitation for just that. Dodging his responsilities and dodging falling chandeliers, Colonel Mustard lends just the right amount of military incompetence to the cast of characters, adding to and driving home the overlying theme of discontent with the corrupt system of the age. 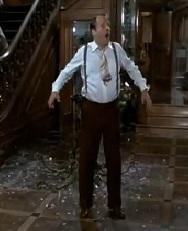 Last but certainly not least, there’s Wadsworth. Though he claims to be a mere butler – “I buttle” – there is much more than meets the eye going on with this character. The master of ceremonies for the whole riotous evening, Wadsworth orchestrates each step of the debacle along the way. With witty repertoire too numerous to even begin to list here, this character is the pinnacle of dry and sarcastic humor. Tim Curry knocks it out of the park, especially when taken into account that he was not first – or even second – to be considered for the part. But as he says so aptly – “Ours is not to question why, ours is but to do and die.”

As well as having this amazing cast portraying some of the most intriguing characters on film, there are some other neat tidbits of trivia to catch for the avid fan. The hall floor is set up to match the gameboard, for instance. The movie was also shown in theaters with three alternate endings, with each theater showing a different ending. Some theaters shared which ending (A,B, or C) they would be showing. Some left it to be a surprise. Due to this quirky marketing tactic, the movie did not do well in theaters, but since has become a cult classic loved by many generations. One more factoid – the singing telegram girl is no other than Jane Wiedlin, lead guitarist for The Go-Gos.

There are an endless number of juicy, interesting, conspiratorial, and downright hilariously clever points and facts that were not mentioned in this article, for the sheer sake of brevity and digestibility. Let this end with a strong suggestion that you take the time to watch the movie for yourself, and see how many new points and classic quotes you can pick out for yourself. You won’t regret it.