The film that gave birth to the slasher, Alfred Hitchcock’s Psycho!  The screenplay, written by Joseph Stefano, was based off the novel by Robert Bloch and stars Janet Leigh as Marion Crane, with Anthony Perkins as Norman Bates.  Also, it was produced and directed by Alfred Hitchcock, in beautiful black and white cinematography.  Psycho would be the director’s last, as he would transition to only color films for the rest of his career.  In the years after Hitchcock’s death in 1980, 3 sequels featuring Anthony Perkins, a made-for-television movie spin-off, a near shot-for-shot remake and television series have been produced.

Set in Phoenix, Arizona, we are introduced to a couple in a hotel room getting dressed after their rendezvous. We learn they are meeting secretly, and have been for awhile whenever they get the chance, during lunch hours or when Sam is in town. The man is Sam Loomis, owner of a hardware store in Fairville, California, still married yet in the process of a divorce. The woman, a secretary named Marion Crane, is single and wishing to marry Sam. Only, Sam is reluctant due to his current situation financially and living conditions, which are in a storeroom behind his hardware store. Sam sarcastically reassures Marion that she can lick the stamps when he sends his ex-wife her alimony. Marion, with her arms around Sam’s neck, accepts, saying seductively, “I’ll lick the stamps”.  They part ways.

Marion returns to her job where she is to handle the financial transition of 40,000 dollars cash. Her boss informs her that she is to deliver it to the safety deposit box at the bank. Marion feigns a headache so she can go straight home after the bank. Only, she never does go to the bank, she goes straight home and packs a suitcase instead. As she drives through the city she speculates on Sam’s reaction to her showing up unexpectedly. She stops at an intersection and as the pedestrians cross in front of her car she notices her boss and the customer whose money she has walking by. Her boss turns and notices her and she quickly smiles, as does he. Then he stops to take another look, but decides to walk on as she speeds off paranoid.

As Marion drives throughout the night she becomes exhausted and decides to sleep some on the side of the road. She is awoken by an officer tapping on her window. The officer, suspicious, decides to follow her into the next town, where he observes her from afar attempting to purchase a new vehicle. Marion arouses more speculation in the car salesman as well, as he himself is hesitant to accept the transaction at first. He finally agrees to take her car on trade, plus 700 dollars, for the new vehicle. The officer pulls in to observe closer. She is in such a hurry to leave she almost forgets her suitcase in her old vehicle, but not before the mechanic shouts, “Hey!” causing her to stop first. 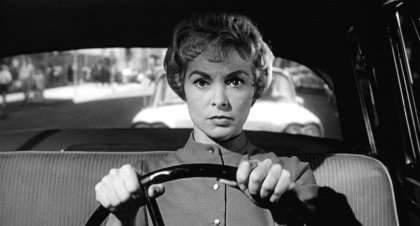 Back on the road again, she travels until nightfall, when it begins to rain heavily. This time she decides to stop at a motel.  The story then takes a swerve into the twisted world of Mr. Norman Bates. Norman runs the Bates Motel, an off-the-highway joint that has been all but forgotten since “they” (as Norman says) moved away the highway. Marion learns she is only 15 miles from Fairville after stating she only wants sleep “except maybe for some food”. Norman, believing she is hungry, offers an invitation to her to eat sandwiches and milk in his kitchen instead of driving to the diner that’s near Fairville. He warmly says, “I don’t set a fancy table but the kitchen’s awful homey”. Norman appears charming, even offering to bring back his trusty umbrella, so naturally Marion accepts.

As Norman returns to his home on the hill, Marion searches around the motel room to find a place to hide the cash she has stolen, finally settling on a newspaper which she leaves laying on the side table next to the bed. Through the open window she suddenly hears Norman’s mother shouting, refusing to allow her son to invite some random female into their home. Norman returns from the house on the hill with the sandwiches and milk, suggesting they eat in the parlor of the office instead. Alone besides his mother, Norman confides in Marion about his loneliness, running the motel, his hobby (taxidermy), running errands for his mother – all while Marion eats sandwiches and milk. Nonthreatening and empathy-evoking, Norman expresses his feelings of being born into a trap which he can’t get out of no matter how much he scratches and fights, leaving him seeming hopeless and a bit disturbed perhaps.

Marion then changes the mood when suggesting to Norman he move away from his mother to start fresh, perhaps even institutionalizing his mother. Norman gets defensive and rants, causing the tension to heighten further. “A boy’s best friend is his mother”, Norman adds at one point, though admitting he would like to curse her sometimes. Marion resolves the situation by departing back to her room, number 1, which Norman has selected for the ability to peep through a hole in the wall from the office parlor. He views her undressing and places the painting back on the wall returning to his home. Marion sits and writes something on paper which she immediately tears up and flushes down the toilet. She gets into the shower washing herself down when over her shoulder through the shower curtain we see the door open and a figure enter.

The shower curtain is jerked open. A kitchen knife is revealed high overhead,thrusting down repeatedly into Marion as she screams, failing to protect herself with the warm flesh of her arms against the cold blade of the knife, then collapsing to the floor as blood flows down the drain. The camera transitions from the drain to Marion’s eye as it slowly pulls out, revealing her dead facial expression laying on the bathroom tile. The camera then pans over to the money in the newspaper on the side table, then over to the open window where we hear Norman yelling “Mother! Oh God, Mother blood, blood!” Norman returns to room number 1 and is horrified by what he sees.

He quickly turns all the lights out and gets to cleaning up the body and blood. He uses the shower curtain to wrap the body then the mop to rid any evidence of blood. He then loads the body in the trunk of the newly purchased vehicle, packing up all of Marion’s belongings and placing them into the trunk as well. As he is about to leave he notices the newspaper on the far side of the room and crosses to retrieve it, then also just tosses it into the trunk along with the rest. Norman drives the vehicle out to a swamp where he pushes it in, nervously waiting as it sinks to the bottom.

Now roughly halfway into the film the lead actress is gone – murdered, wrapped in plastic, stuffed into the trunk of a car and sunk to the bottom of a swamp.  Marion, having gone missing – plus having stolen 40,000 dollars in cash – has her boss, fellow secretary, the man whose money she stole, her sister, her boyfriend Sam and one very thorough private investigator all very curious as to her whereabouts.  This sets in motion the rest of the film as the mysteries aren’t revealed to all until the very end.

I repeat, gone, as it’s very uncommon to kill off your lead halfway into a story, especially on film, where the stars are what sell the tickets, are they not? Even more so since it was released in 1960, Hitchcock shocked audiences and critics alike, even taking great lengths to prevent any information from being released that would spoil the ending to his film. So too, I do intend to withhold the ending spoilers of Psycho as a clear sign of respect not only to Alfred Hitchcock but to the respectability of the plot itself.

A must-watch film, Psycho is THE classic horror/mystery/thriller that spawned the slasher genre. John Carpenter would go on to name Michael Myers’ doctor in Halloween (1978) Sam Loomis and even cast Janet Leigh’s daughter Jamie Lee Curtis in the lead role, where the killer stalked his victims with a simple kitchen knife. Unlike modern-day slashers, Hitchcock approached the film uniquely, to say the least, placing twists and turns to the story unexpected at the time in cinema. To divulge too much would be to take away from the experience. A true master of storytelling and camerawork, Hitchcock solidified his ability in Psycho, creating an iconic killer and a murder sequence that still haunts people to this day.  I give it 4 out 5 for a rating of Great.

I first watched Psycho at a very young age with my mother.  She knew the film and approved of my watching.  I knew Alfred Hitchcock from his television show that would come on after Batman on Nick at Nite.  Hitchcock’s name gave me that seal of approval.  Hitchcock was the first director I respected for scaring me.  I’ve never forgotten the shower scene myself and I don’t know how you could, unless you’ve been overexposed to modern entertainment.  It was shocking for many reasons, the least of which was a toilet being flushed for the first time in Hollywood’s history.  Clever camera work makes Janet Leigh appear nude without ever appearing nude besides a possible body double.  So if that wasn’t enough of a shock, another character enters in silhouette, brandishing a knife, and begins stabbing the lead character while horrendous violins screech, blending with her screams!!!  Fucking frightening and so thankful my mother allowed me the experience.  Bosco syrup running down the drain looks as real as it gets.

One bit of information I personally find interesting is, Hitchcock used his television crew from Alfred Hitchcock Presents to film Psycho instead of his usual film crew.  It was an attempt to save time and money, as Psycho was a low-budget film at 800,000 dollars.  This, plus the idea that it would be too gory in colour, made him choose to film in black and white.  Though the most intriguing idea to me is that he wondered, if so many bad low-budget b/w “B” films could make money, what would happen if a really good low-budget b/w film was made?  This should be inspiration to all as it earned 50 million worldwide.