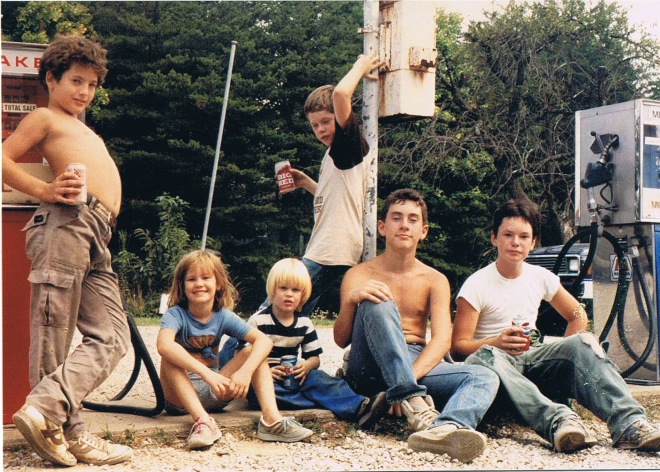 Something is always missed when I hear comments about this photo.  It’s not just a photo that reminds me of Stand by Me.  It’s not just a photo.  It’s a representation of my childhood. Tuesday walks to Spurgeon’s Corner fill my head with memories.  The “boys” weren’t just four older cousins that picked on my sister (“Mindy got a big ol’ butt!”).  They were each a unique personality of their own.  I love thinking back when we are together and making fun of each other for the way we use to be and pretty much still are.  Only, it’s less and less that we are together.

My cousin Brian had a macho army attitude; he was the oldest and that made him an adult that was allowed to use glasses and not the plastic cups under the counter like the rest of us.  He was also the cousin that held me in his arms as I cried after I had dropped to my knees in the backyard, in standing water that pooled after a heavy rain, slicing my knee open on a piece of glass.  It hurt but the memory seems less painful.  The feeling of having my cousin Brian around since I was a young child hasn’t changed a bit.  I always felt safer in his presence, his size very intimidating, and when you know he’s on your side, it’s very comforting.  He even made a career in the military doing some bodyguarding, I do believe.

My second oldest cousin Mike had his “party on Garth” attitude and obsession with Aerosmith that always made me smile.  I was the only person to watch my cousin Mike climb high into our Mamaw’s big tree in her backyard, only to have a limb break, causing him to come falling through all the limbs to the base of the tree with a loud THUMP!  He landed on his back and, ( maybe I had watched Indiana Jones too much at this point) I drily informed him he had grass on his tooth.  He became distressed and hit my hand away when I extended my finger forward, trying to get the single blade of green.  I always thought he was a genius with his drawings and little movies he made with an old VHS camera. “Roadkill. Yum!” featured my sister Malinda and Mike eating roadkill in the middle of the road with plastic forks from Spurgeon’s Corner with ketchup on them.  Then there’s the classic “Bite my WAD!” with Blake doing one of his many hilarious characters.  He even once edited together a short film inspired by Young Guns.  Using his brother Nat, he cut together scenes and placed music over it.  Though not to  forget his own Mike’s World episode based off Wayne’s World, which was amazing as a kid, and still hilarious today.

Blake, younger brother of Brian, was a bully of sorts that always wanted to hurt you or do something rotten. Unfortunately for Blake he got picked on more than most for the way he was.  I doubt it was deserved but maybe it was a balance for him.  Either way he is a very sweet guy even if he’s a bit short-bus still.  He’s more of a private guy than most sometimes, but he loves to have a good time.  He knows how to party, fish, hunt, squeeze you tighter than you’ve ever been squeezed in your life when he hugs you, but he’s also the guy most likely to stop to help someone that looks to need it.  I believe some men are hard for others to judge, accept or just comprehend, and since they don’t fit into the current society they are more than likely dismissed before being appreciated.  I believe my cousin Blake is one of these men.

Last on the list of the “boys” is Nat – a child’s John Wayne.  Looking back he was the Peyton Manning of role models, the “good” guy or “nice” cousin.  He was my hero growing up.  He knew everything and always had a way to explain any question.  He even taught me how to play basketball.  I remember the day he told me to stand under the basket so I would actually have a chance to make a shot – and I did, eventually.  I always wanted to play basketball on a team with him. When I got out of the Air Force I played in a tournament on his all-star team that I didn’t deserved to be playing on,  but it didn’t matter.  It was like having the honor of playing basketball with Michael Jordan, or for me John Stockton (You know, a team player that is respectable and finds strengths in others and not some cocky ball-hog that sold out more than Zhu Zhu Pets).  Recently we’ve been in the talks of our return to the courts, it’s been some years but it’s time to really show some folks how to play ball.  I’m a Hoosier and I am forever in love with playing basketball – are these things connected? I don’t know.  Recently I watched  ESPN’s 30 for 30 Bo Jackson doc and realized that was how I viewed my cousin Nat as a child.  Nat played baseball, basketball and was the most athletic person I knew.  I know that when I didn’t know something I probably always thought, “Nat knows.”

I just thought these memories should accompany this great photo.  I know they are the memories that come back when I sit and stare at the characters at those pumps.  The best cousins ever, I love them all.

An absent-minded plothole, as far as narratives go, so it seems... View all posts by Roger Malcolm

10 thoughts on ““Characters at the Pumps” Insight”